At 140 metres high, the West Tower in Old Hall Street is by far the tallest building in Liverpool. As with any high rise project in a tight city centre site, several aspects of the construction presented significant challenges to the main contractor Carillion.

Reportedly employing the tallest tower crane in the UK at the time, as well as a 120 metre hoist and two Scanclimber SC5000 mastclimbers, the building houses Britain's highest restaurant - the Panoramic Restaurant Liverpool - on its 34th floor.

The mastclimber erected to the full height of the building on the North elevation was to enable Dobler-Metallbau to fix the glazing panels. The machine could not be based out at ground level due to obstructions, so instead had to be supported from a specialist fabricated gallows bracket at second floor level. The gallows bracket was drill fixed through the highly reinforced 450mm thick core wall with anchoring bolts and plates and the mastclimber base and machine lifted and fixed into position on the bracket. The machine could then be progressively erected to full height, anchoring into the concrete core as the mast progressed.

Brogan Group selected the SC5000 for a variety of reasons, particularly its lift capacity, platform capability and its ability to handle the 110 metre working height requirement.

The mast climbers were then fitted with offset platforms and 2.2 metre long extensions to wrap around the lift tower sides. The two units performed without a major hitch and the project was completed at the end of 2007. 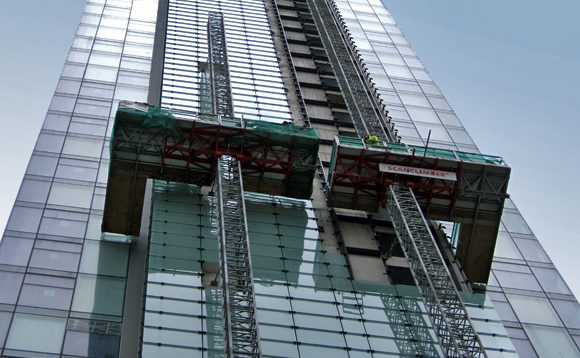