Soon to be known as “The Forge”, the Redclyffe Road project in Upton Park, will provide 192 new homes spread over the three 5-storey blocks and the single 14-storey tower, which will boast unobstructed views across East London. Brogan Group are providing scaffolding and hoist access for the project, which will be a significant focal point for the Upton Park area.

We were heavily involved early in the project to help ensure all technical aspects of the scaffold design were appropriate and achievable. Due to the tight area within the podiums of each block, especially the 14-storey tower, a very complex loading platform was required to allow the hoist to access two of the blocks simultaneously. This resulted in a 45m high, 15m long hoist runoff platform which extended away from the tower. Subsequently, more than half of the scaffold needed to be untied. On top of this, a twin passenger/goods hoist would be tied to the scaffold, presented Brogan Group with challenging technical project. Utilising our in-house Design Engineers, we were able to provide a scheme of cantilever beam work and truss supports from the return elevation ensuring stability of the structure.

This was just one such complex structure, with the site requiring multiple design schemes to allow basing out of large sections of scaffold on roof levels, requiring the base of the scaffold to be bridged allowing all load locations to land on structural members. Liaising with our client and their temporary works engineers, Brogan Group’s engineering team and on-site operatives allowed the client to carry out various works which otherwise would have been obstructed. Cantilever loading bays were also introduced at a later stage of the project to the 14-storey tower, allowing further material access to the scaffold.

Along with the scaffold, Brogan Group also provided single and twin hoist access to each of the blocks. This allowed us to control the interface between the scaffold and hoist locations and provide The main contractor with a greater on-site knowledge of both services, ensuring smooth installation and usage. Hoists were erected through voids in podium slabs as well as on the link road area between blocks, which provided their own logistical issues that were overcome by our highly experienced operatives.

The “Forge” development, which is located near West Ham’s former stadium, is due for completion in 2019. 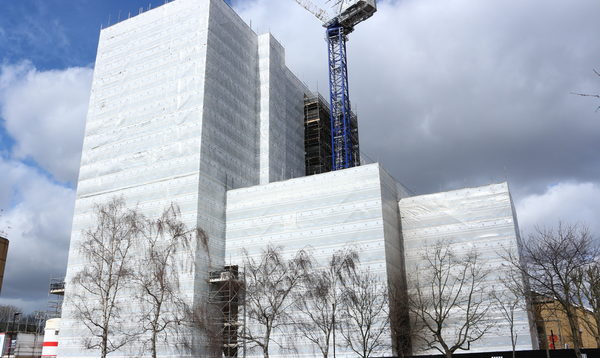 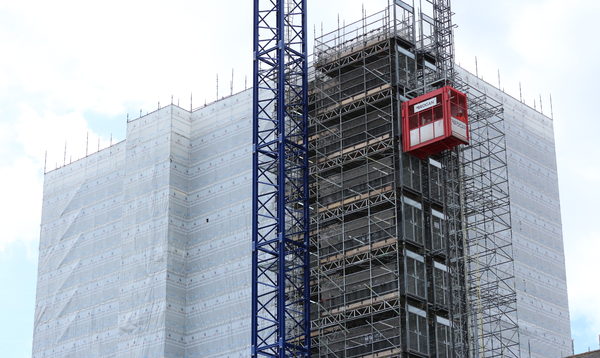