It uses 13.6km of steel, which is the equivalent of 16 Burj Khalifas laid end to end along the ground, and is almost as wide as two Airbus A380 aircrafts lined up wing to wing.

Meaning ‘connection’ in English, Al Wasl is the historical name for Dubai. The steel trellis is the centerpiece of the site connecting the three main zones of Opportunity, Mobility and Sustainability — the central themes of the Expo 2020.

Al Wasl Plaza encloses a space of 724,000 m3– the volume of almost 300 Olympic-size swimming pools and will be the setting for the largest 360-degree projection surface in the world. Striking images, films and lights will be beamed on to the translucent dome via more than 200 fitted projectors. It will host performances, concerts, and events throughout the six-month event and long into its legacy stage.

It took 14 months of preparation starting back in 2017, with Brogan Group joining the team in 2019 when the project started requiring access solutions. In total, we supplied circa 250,000 m3 of scaffolding for the one-of-a-kind project.

To lift the Al Wasl Dome, 550 tonnes of moulded steel needed to be raised, with only a 3-millimetre margin of error. 18Nos Stand Jacks, which were aided by steel lifting ropes connected to 18Nos freestanding temporary columns were used to lift the dome over a 36Hr period.

As well as over 30 country pavilions, Brogan Group worked on the Emergency Service Stations, ENOC’s Al Ghaf Petrol Station, the Expo Metro and the Expo Mall.

The “World’s Greatest Show” will now commence on October 1st, 2021, after a year delay due to the COVID 19 pandemic. 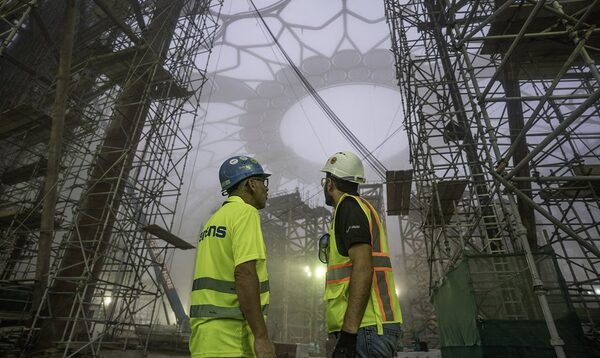 I wanted to drop Brogan an email to congratulate you on a really fantastic job on the Expo 2020 Al Wasl Trellis. The early days admittedly, we had few opportunities that required your assistance to improve. Since that intervention, the team on site have been impeccable. They have completed a very complex 360-degree scaffold structure in excess of 50 metres high without a single HSE violation. The team have risen to every challenge and design change without complaint or question. They have committed to the task and delivered a safe quality scaffold structure. The team (on and off site) and the supervision on site are a credit to the Brogan Scaffolding. I will have no hesitation in recommending Brogan on any future jobs I work on in the UAE or indeed in the UK.”